The feasibility of using active flow control to stabilize a micro ducted fan unmanned aerial vehicle in a yaw motion was investigated experimentally. Flow control was implemented using synthetic jet actuators to manipulate the flow around the vehicle's stator vanes. As a result, this mechanically simplified control approach can be used to generate a yaw moment on the vehicle instead of moving control surfaces and articulated rotor blades. The rotational control of the MAV (165.5mm in diameter and 177.8mm in height) was obtained by activating surface-mounted synthetic jets that were mounted on a set of four fixed stators downstream of the duct. The synthetic jets were located downstream of a deliberately formed local separation to enable controlled flow reattachment. The flow field around the stators and in the wake was studied using particle image velocimetry (PIV) where the geometrical angle of attack of the stators was either 0° or 6° and the propeller rotational speed was either 4,200RPM or 9,000RPM (generating a thrust of 2.2N or 8.8N, respectively). The torque generated by the propeller and the counter-torque induced by the combined stators-synthetic jets was measured using a load cell. Activation of the synthetic jets resulted in a partial or a full flow reattachment and thus induced a controlled change to the lift and drag forces on the stators. The modification of the aerodynamic forces yielded a rotational torque that can counteract the torque generated by the propeller. A closed-loop controller with gyroscopic feedback was implemented to regulate the yaw rate to zero and reject disturbances caused by changes in propeller speed. 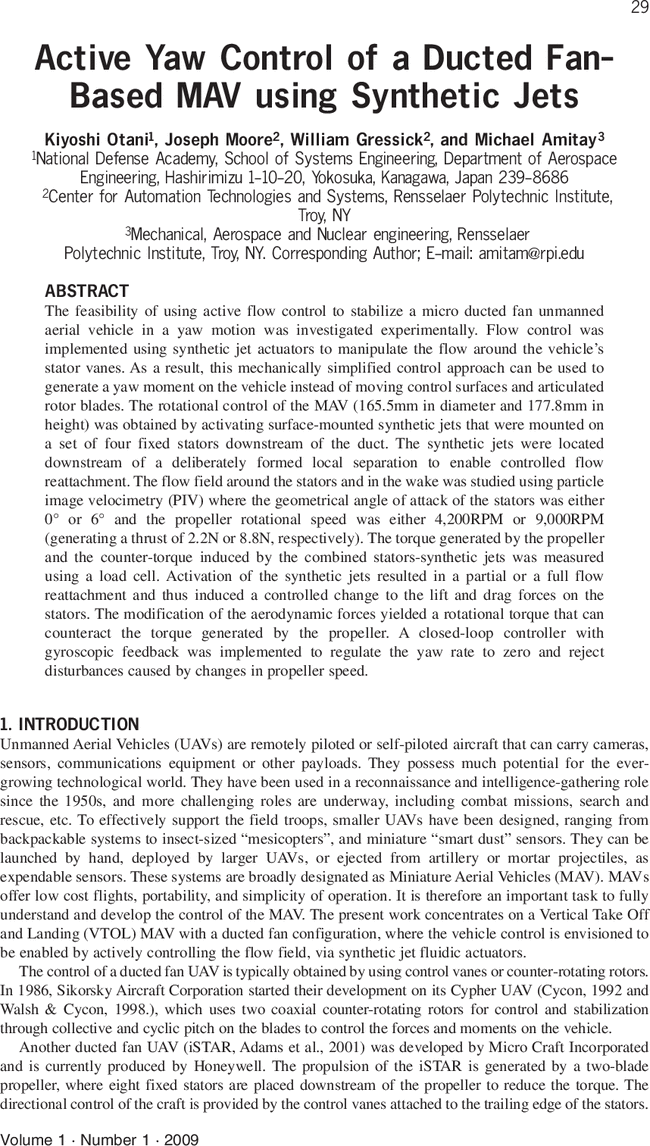