Experimental and Numerical Investigation of Active Control of Inlet Ducts

The effect of steady and unsteady control jets on the performance of a very aggressive (length to exit diameter ratio, L/D, of 1.5) inlet duct was investigated. Experiments were performed for a range of inlet Mach numbers from 0.2 to 0.45 and compared with numerical simulations for the baseline flow case at an inlet Mach number of 0.45. A brand new facility was designed and built to enable various actuation methodologies as well as multiple measurement techniques. In the present work, a pair of control jets was placed in streamwise locations where flow was expected to separate. Steady and unsteady static pressure measurements, along the upper and lower walls of the duct, were performed for various combinations of actuation. The parameters that were tested include the control jets momentum coefficient, the blowing ratio, the actuation frequency, as well as different combinations of jets. It was shown that using mass flux ratio as a criterion to define flow control is inappropriate, and one needs to provide both the momentum coefficient and the blowing ratio to quantify the flow control performance. In addition, steady and unsteady total pressure measurements were conducted at the Aerodynamic Interface Plane (AIP) to obtain the distribution of the pressure recovery and surface pressure. Furthermore, the interaction of the control jets with the main flow was explored using Particle Image Velocimetry. Flow control was found to be more effective at the lower Mach number where the blowing ratio was higher (for the same mass flux ratio). The data suggest that unsteady actuation is more effective (compared to steady blowing) and more efficient (requires less input pressure). As expected, using 2-D actuators to affect a highly 3-D flow field is not optimal, and as such a spanwise varying actuation should be implemented in future work.The numerical simulations employed a stabilized finite element method to perform turbulence computations (Jansen, 1999) using two variants of the Spalart-Allmaras (S-A) model; the original one-equation S-A model (Spalart et. al., 1992) in an unsteady Reynolds-averaged Navier-Stokes simulation (URANSS) and a hybrid S-A model (Spalart et. al., 1997) in a detached eddy simulation (DES). While the inclusion of unsteadiness in URANSS is a step in the right direction, the basic deficiencies of RANSS for adverse pressure gradient, separated flows lead to poor prediction for a flow this complex. On the other hand, DES results are in good agreement with the experimental measurements. Specifically, URANSS model predicts two large, stable vortices at the lower corners that pull the flow down at the centerline and thus, leads to higher pressure values and under predicts the flow separation on the centerline. 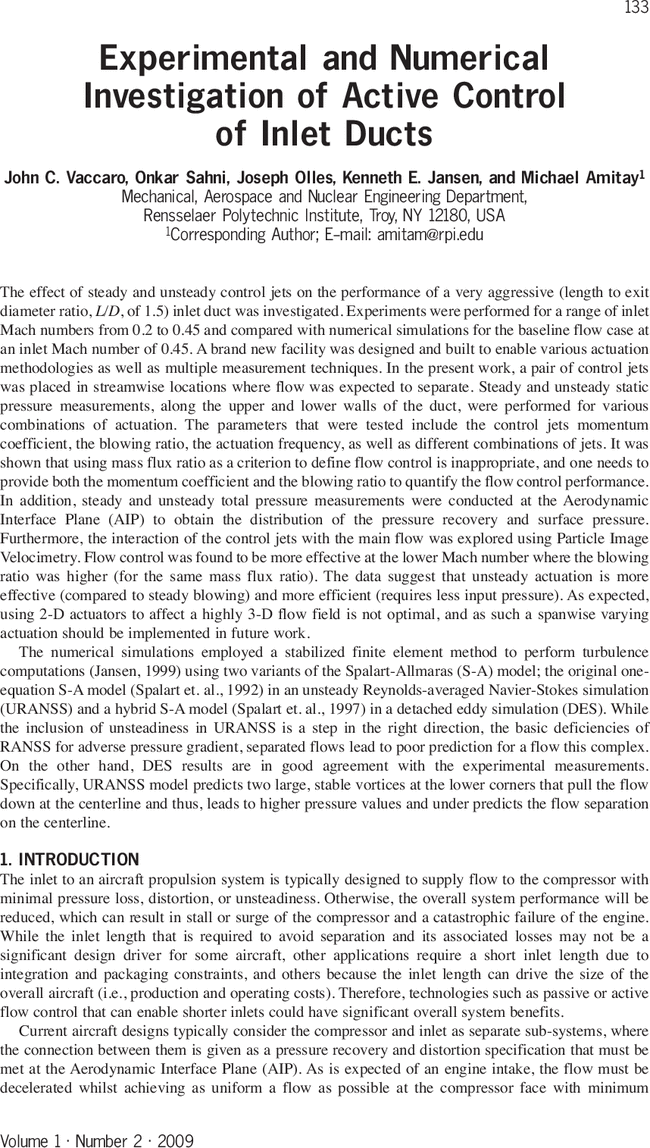