This work is about the interaction of three parallel non-ventilated turbulent slot jets. The central jet is set symmetrically between two identical lateral heated jets. There are so many applications of this flow configuration in engineering such as gas turbine airfoils, heating or cooling surfaces, combustion and mixing flow. Computations are achieved by finite volume method. The numerical predictions confirm the three types of flow patterns given by the available flow visualization. Furthermore, a fourth type of flow pattern is found in this paper. For a given distance between two neighboring jets of 11 times the nozzle thickness (D0 = 11a), the effects of the velocity ratio on the dynamical and thermal flow fields are examined. Therefore, the contours of the streamlines, vorticity, pressure, kenetic turbulence energy and isotherms for several velocity ratios (0.3 ≤ λ ≤ 15), are discussed in this paper. Several temperature gaps (10°C ≤ ΔT≤ 50°C) between the two neighboring jets are considered. Both centerline and crosswise profiles of the averaged velocity and temperature are found similar for several temperature gaps at each velocity ratio. In the developed region, a comparison between the available data of the single free jet and those of the three jets is carried out in order to evidence the effect of the presence of the two side jets on the mixing phenomenon and heat transfer. It was found that the addition of the side jets increases the rate of decrease of the average velocity along the central jet axis for the flow of type A and decreases the rate of decrease for the other types of flow. The effect of various types of flow on the spreading decrease of the velocity and the temperature in the fully developed flow region is also investigated. The diffusion of temperature depends strongly on velocity ratio (λ). 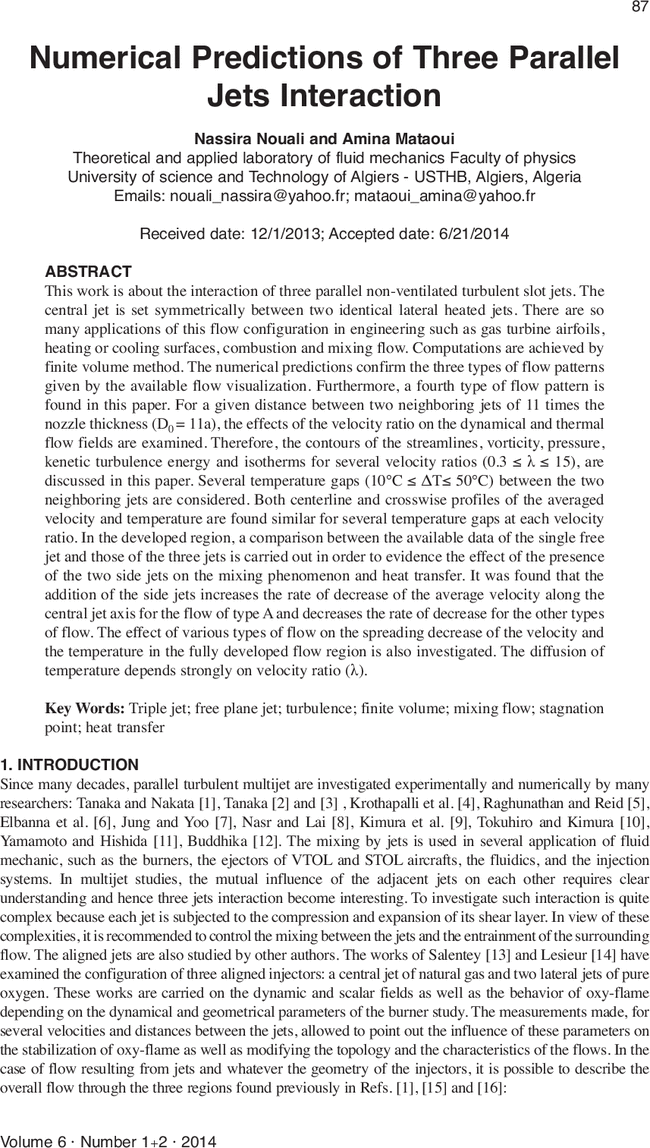