Flow control has the potential to improve the efficiency of aerospace systems. The design of a flow control system requires knowledge of flow phenomena including information on the evolution of naturally occurring disturbances in the flow. Natural flow disturbances can evolve at various frequencies and growth rates and can assume various mode shapes. Knowledge of the behavior of natural flow instabilities could aid actuator selection and strategy for flow control. In this paper we use linear stability analysis as a tool to analyze jet and cavity flow control situations. We present results from a linear stability study of the resonant acoustic mechanisms in subsonic impinging jets and subsonic cavity flows using the compressible Rayleigh equation. In an impinging jet, the subsonic instabilities are known to be responsible for the acoustic feedback, which is an essential link in setting up the resonances associated with this flow. The instabilities of the helical type are also relevant from the standpoint of the necessity of their existence for jet interactions that may occur in twin nozzle configurations. In the first part of this paper, we focus on helical instability modes in an impinging, high subsonic Mach number jet and examine parameters governing their existence. Using the axisymmetric compressible Rayleigh equation in conjunction with realistic mean velocity profiles, we show that the subsonic helical instabilities in impinging jets are dependent on the jet momentum thickness. Our studies show that at higher subsonic jet Mach numbers, the helical instabilities can exist even at large streamwise locations, indicating that they could play a significant role in the resonance mechanism for a large range of stand-off distances. In the second part of the paper, we use linear stability theory to examine two flow control techniques used in cavity flows. The first control technique acts in a way as to physically lift the shear layer and detune the pre-existing resonance feedback loop. The second control technique uses spanwise coherent vortex shedding downstream of a cylindrical rod in order to provide resonance suppression. Linear stability calculations using the two-dimensional compressible Rayleigh equation in conjunction with experimentally measured mean velocity profiles are performed in order to highlight further differences between the two techniques. Experimental measurements of the instability amplitude of the spatially amplified modes in the shear layer show excellent agreement with results predicted using linear stability theory. It is hoped that a knowledge of the physical mechanisms occurring in these feedback enhanced flows could prove essential in designing actuators used to suppress/eliminate the resonances occurring therein. 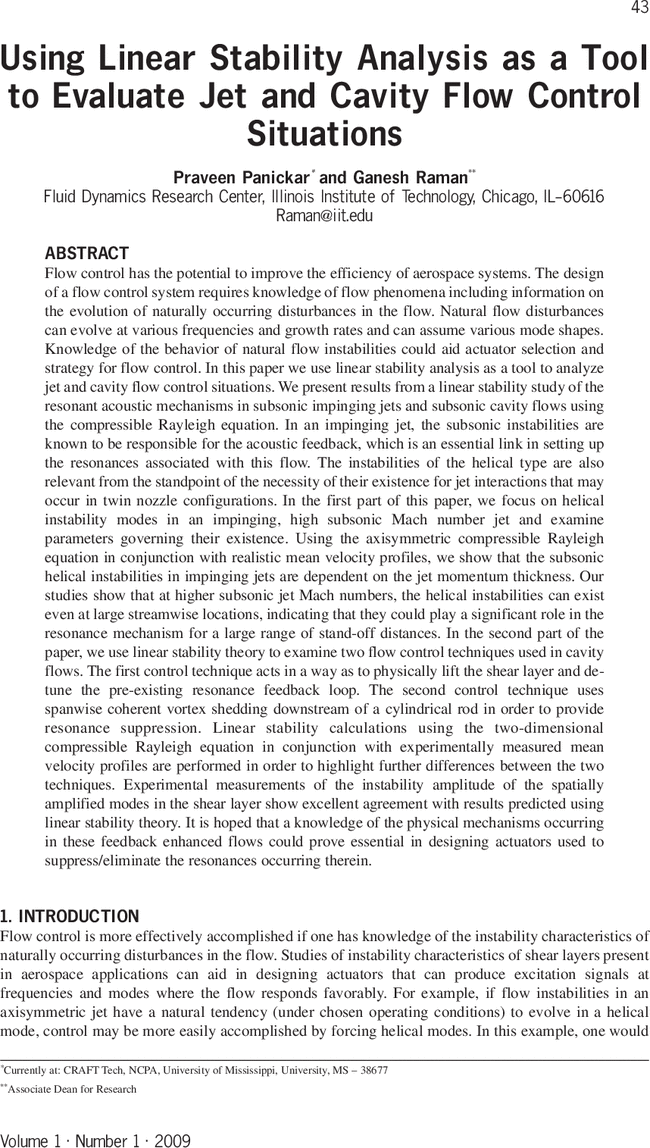